Cory Scott has won his fourth consecutive competition by taking out the ever-popular Taupo Regional event held on Lake Kuratau.

The result meant that multiple national champion Cory added to his recent victory at Lake Aniwhenua and his two national title triumphs (Rivers and Lakes) at the back end of the 2021/22 season; meaning he has won the last four competitions he has fished.
“It was super fun, the fishing was great and I had good boat partners so it was a really enjoyable weekend,” said Cory. “These days I’m competing very much to go and connect with people. I’m just looking to go and have a good time, so I choose events that I like to fish in and where the fishing’s good.

“I’d like to congratulate Tim and Neil as well for fishing so well across the weekend. I really can’t say enough about Neil in particular, I mean to be doing what he’s doing in his 80s is simply incredible. He’s always competitive it’s amazing. I’m just hoping I’ll still be able to stand up at that age and he’s out there slaying it.”

Asked whether the feeling of winning competitions ever gets old he said he never gets complacent.
“I don’t ever expect it. I’ve put in a lot of hard work over the years to achieve the results and I guess, by this stage, I’ve got enough experience to fall back on when conditions change, or when things don’t go according to plan.”

Cory said in the blustery conditions on Saturday, ensuring good contact was even more critical than normal, as was maintaining your calm when the inevitable fish were lost.
“I had lots of chances at the start of my first session but dropped quite a few fish. The thing is in those conditions with a lot of wind you’re going to lose fish and that’s just the way it is; you have to have the mentality to just move on straight away to the next one. Be calm and trust in your processes, and the fact that over the course of three hours it’ll work itself out. For example if you see an angler in a neighbouring boat bring three in in three casts you can’t let that fluster you either.
“As an angler I’m eliminating things as I go, searching for intel all the time. I was happy with my decision making, changing when I had to change to plonking. For example in that first session I stripped for two hours and towards the end of that two hours I noticed I was getting a lot of fish on the hang; so I went to plonking and that worked well.”
He mixed it up over the weekend even taking fish on the dry fly.
“One of the coolest things for me on the weekend was that I caught four fish on dry flies, two in the second session and two in the third. They were coming up all around us so I put on a couple of dries and it worked, they came up and smashed them.”
Even the best make mistakes though.
“The first take I got on dries was quite funny. I struck and my line went slack like I’d missed the strike but I could see my fly, which had an indicator post on it, swimming off beneath the surface in the opposite direction. I hadn’t tied the knot properly and I was just left with a curly bit of tippet whilst the fish swam off with my fly.”

Lake Kuratau is the smallest of Taupo's fishable lakes and contains a high population of smaller trout. This small hydro lake sits on the western side of Lake Taupo and is home to predominantly rainbows, but browns are also present and can reach very large sizes.

Competition organiser Damon Taylor said it had been a great weekend with the largest field of anglers for the season to date.
“Congratulations to Cory for his deserved victory, he’s once again having a dominant season with two lake wins already, following his victory a couple of weeks ago at Aniwhenua,” said Damon. “Fantastic to see Neil Hirtzel on the podium once again in third place, very inspirational, especially considering many of the competitors are more than half his age and some are even a quarter of his age. Incredible, so congratulations to him, and to Tim Anderson as well on his runners-up spot.
“It was great to see the largest field we’ve had for the season so far with 26 anglers taking part. The fishing was really good with high numbers of fish and I think pretty much everyone managed to get amongst a few at some stage over the weekend.
“The conditions were testing on the first day with a lot of wind, which rewarded anglers who persevered and really sort out those fish-holding areas. The second day was completely different with flat calm conditions for much of the morning session which again challenged people to change their approach.
“I would like to say that it’s also great seeing some of our former top anglers returning to the sport, with Aaron West and Sam Bourne both competing over the weekend. As well as that we had our three Silver Flies, Tim Rich, Ollie Bassett and James Fuller, fishing their first competitions since representing us so well at the recent world championships in Asturias, Spain.”

Damon said there were a few people who needed thanking for helping bring the whole weekend together.
“Thank you to Paul Bassett for doing such a great job with the scoring, to the landowner for allowing us to park on his land, and to all the competitors for making it such an enjoyable weekend.
“Thanks also to King Country Energy, who manage the lake, for setting it at a good level for us, as well as DOC who manage the fishery and are always supportive of our events.” 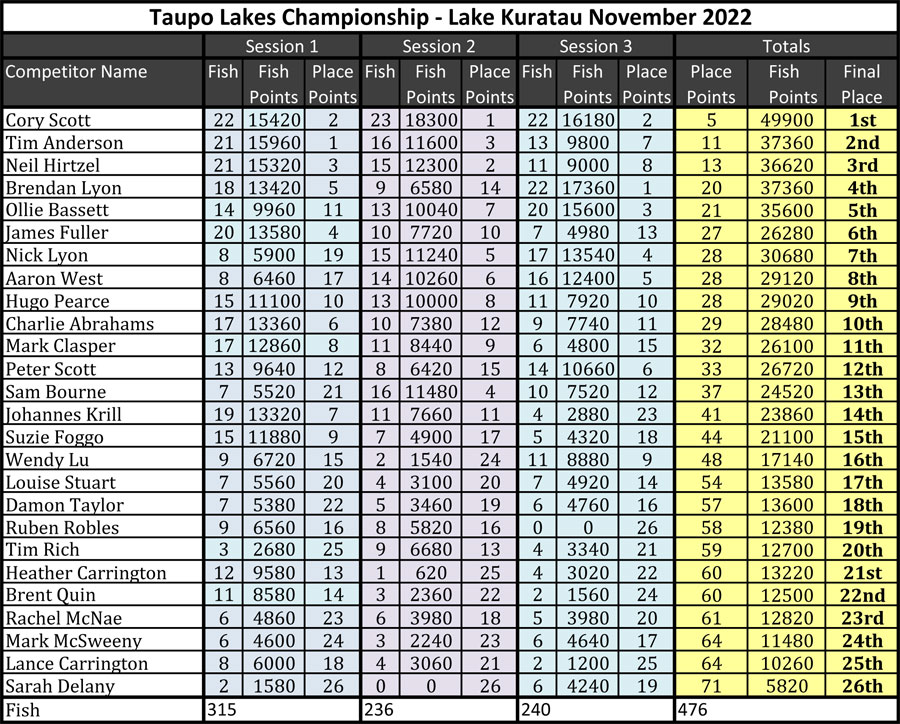 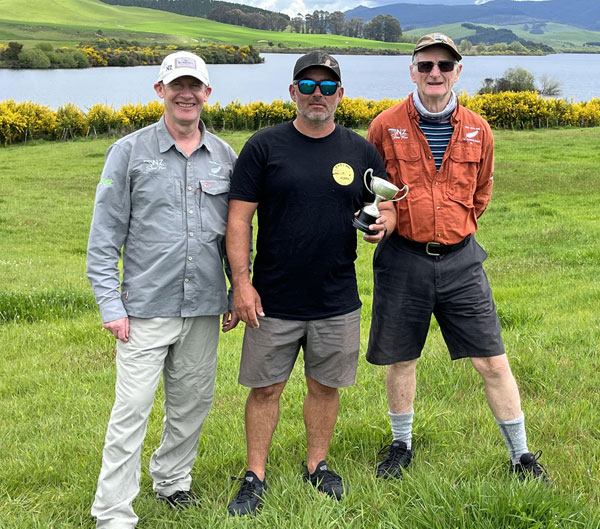 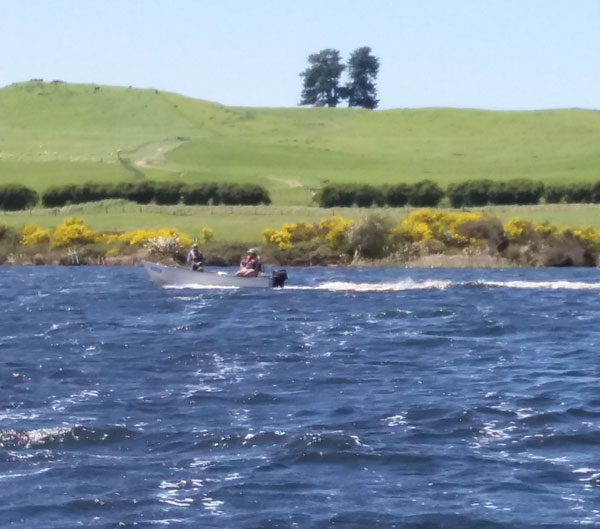