The weather through everything at us over the final weekend of the 2014 Rod and Reel Nationals. Three sessions were planned on the Tukituki and Manawatu rivers however persistent rained turned the rivers to mud and other options in the region also were effected.

The Mangatainoka was chosen as the only fish-able river in the region and a last minute effort saw 20 beats marked out in 3 hours by a number of competitors.

Session 5, the first river session, saw Cory Scott and Johannes Krill take the honours with 35 and 31 fish respectively. In the second session Dan Comer and Brendan Lyon, our two leaders from the lake section, came out in front with 26 fish each. Several large rainbows were landed with Lloyd Struthers managing the biggest of the weekend with a 58 cm beauty.

In the final session Paul Dewar scored a National record equaling, 44 fish with Dan managing 32 fish at the foot of the Tui brewery. A total of 591 fish were caught and released, over the 9 hours of competition, with the average size just under 30cm.

The final scoring came in with the top place getters from the lake section continuing their form on the rivers. Dan Comer was "crowned" the 2014 National Champion with Brendan Lyon 2nd and Geoffrey Bernsten an amazing 3rd in his first Nationals. Congratulations to all the competitors and thanks to the organisers and controllers for making the weekend a success. 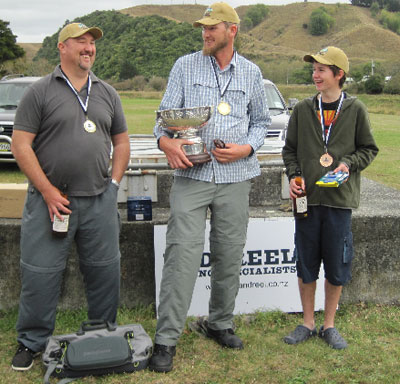 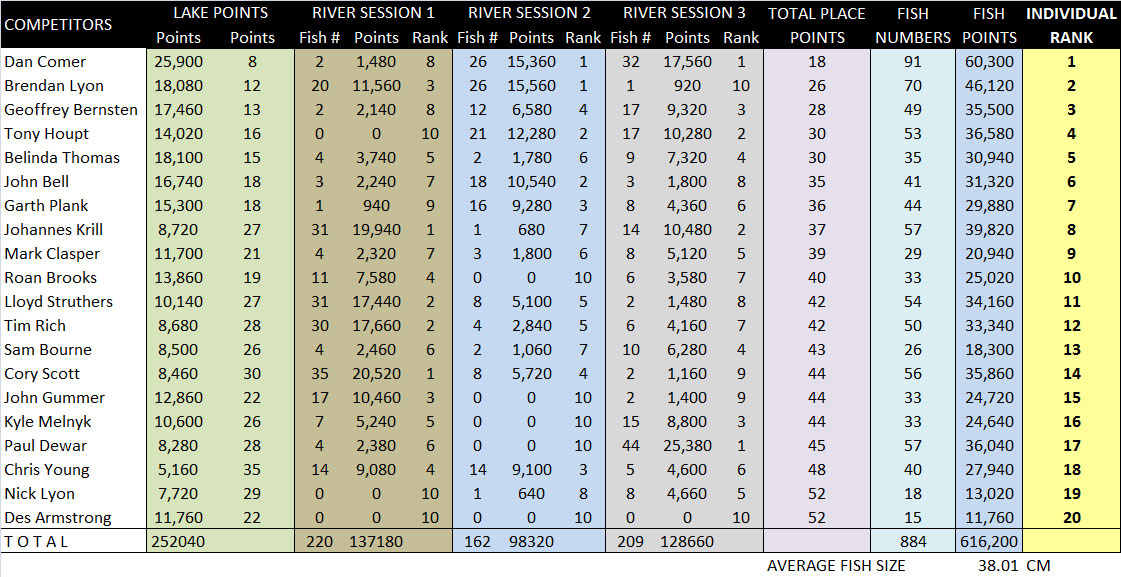 The lake portion of the 2014 Rod & Reel National Championships were held over the weekend of 22 and 23 March on lakes Kuratau and Rotoaira.

On the Saturday all anglers fished two sessions on Lake Kuratau. The water was turbid with a light easterly breeze. Fishing was relatively tough with Belinda Thomas and Geoffrey Bernsten coming out on top with 6 and 4 fish respectively. Belinda netting a 64cm brown, the biggest of the weekend.

Session 2 saw Dan Comer, with 10 fish and Roan Brooks, with 7, out on top. At the end of day one Dan led from Roan and Geoffrey in 3rd place.

On the Sunday we headed to Rotoaira. Again a light easterly welcomed us, and we fished the western end of the lake in the morning session and the eastern end in the afternoon.

The morning session was won by Dan with 10 fish and John Gummer with 8. Fishing with little wind was tough however the lake yielded some fantastic fish in great condition. Roan Brooks netted a beautiful57cm rainbow. In the afternoon Brendan Lyon with 9 fish and John Bell with 8 took the honours.
So the first section of the 2014 Nationals ended with Dan Comer leading the way from Brendan Lyon in second and young Geoffrey Bernsten in his first Nationals in 3rd place.

The 3 river sessions that will complete the Nationals will be held over the weekend of 11 and 12 April on the Tukituki and Manawatu Rivers.

Results after 1st round of championships on lakes