The 2006 CD SFFNZ champs were held on the 17/18/19th of March based out of Rotorua. Twenty two anglers broken up into two groups (A & B) competed for the title.

The first session to the competitions was held on Lake Atiamuri in nice calm flat conditions, most of the boats rushed of to the top of the lake so room to fish was at a premium, Lloyd Struthers opted to go up the arm which was good choice as not only did he have that area to himself he also won his group with 4 fish. Paul Dewar won group B with 4 fish also.
Session 2 was at Lake Whakamaru, again the conditions were good but this lake proved quite hard for some with 5 blanks being recorded. Steve Brown came out on top in group A with 4 fish and Dan Comer won group B with 4 fish also.

Day 2 was the river sessions with group A on the Waihou in the morning and group B on the Ohinemuri River, Ye Huang won group A with 14 fish, Steve brown was unlucky to piped with 14 fish also. On the Ohinemuri Aaron West was the best with 7 fish and Garth Plank second with 4, fishing was a lot tougher on this river with it being low and clear and there were 4 blanks recorded.

In the afternoon Kiyoshi Nakagawa won on the Ohinemuri landing 5 fish and Des Armstrong won the Waihou session with an incredible 16 fish. Dan Regan was second with 10.

The placing’s were quite tight going into the last day on Lake Kuratau with several people being in a position to win the championship.
There were a lot of fish caught with good conditions on the lake, Lloyd Struthers won group A with a fine bag on 17 fish. Aaron West won group B with 16 fish just beating Nicholas Dobbyn who also caught 16.

Ye Huang was the championship winner with 15 placing points, last years winner Aaron West was second with 18 and Des Armstrong 3rd with 20.

It was a great competition with a lot of fish caught on most of the venues. 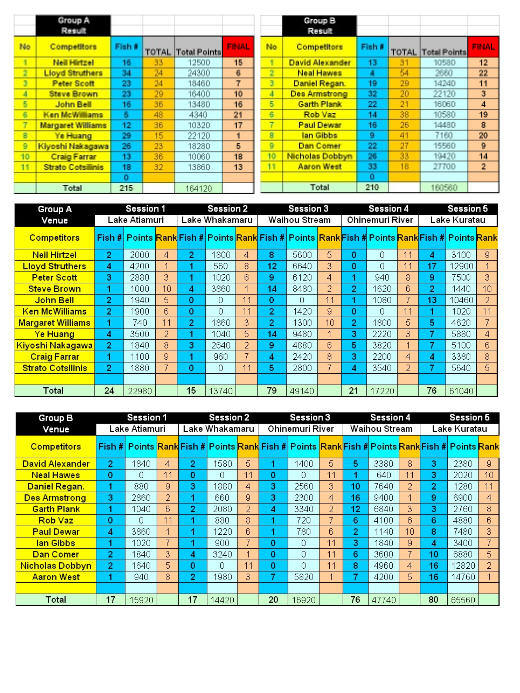