AUCKLAND ANGLERS RETURN AS REIGNING CHAMPION RETAINS CROWN ON WHIRINAKI RIVER
Auckland anglers were welcomed back to the fold as a reigning champion defended his title at the first Sport Fly Fishing New Zealand competition of 2022.

“It was great to have everyone here for the first comp of 2022, and especially to have our Auckland friends back, as they’ve done it tough being in lockdown for a big part of the latter half of 2021,” said Cory. “As a New Zealander I’m grateful for what they’ve done, making the sacrifice to their lifestyles and freedoms to keep us all safe, so definitely a huge thank you from me and welcome back it’s great to see you all again.”
Cory was pleased to have won but was viewing the competition in terms of his broader preparation and training.
“I’ve come back to the sport with the carrot dangling of going to the World Championships in Spain later this year. I was here to really work on structure for Spain, so I wasn’t really here just to try to win the comp, it was more about working on the bigger picture in a competitive environment. I’m happy with the win obviously but I’m happier that things are starting to come together as far fitness, stability and strength are concerned after I broke my foot in October.
“In Spain we’re going to be fishing super light; light leaders, light tippet, light flies, and so I’ve been doing a lot of that lately and probably gravitated a bit too much that way to start off with and had loss of contact because of the wind on that lighter set up in my first session. So I made a few mistakes there and probably didn’t fish as well as I could’ve but it came together after that.”
Cory added that he felt very at home on these types of waters.
“These river types are my favourites, it’s what I grew up on, these structured pieces of water. The Waioeka is a bit larger but very similar and that’s my home water, so I’m comfortable reading rivers like this because it’s my bread and butter.”
He added a tip for those looking to do well in river competitions.
“The secret in a two-hour comp is to analyse the good holding water and then to spend the majority of your time in that water. If you try to fish every single inch of water, you’re just going to burn up time and not get the best out of your beat. In every river there’s spots which hold higher volumes of fish, identify those and concentrate your efforts on them.”
Competition organiser Billy Thrupp said the weekend had gone well.
“The comp went well other than the wind, which may’ve caused some people a few issues but, all in all it was a great weekend. I had a blast with the people I got to fish with and it seems like everyone else had a bit of fun too which is what it’s all about. People enjoy this venue, the fish are big and strong and put up a good scrap. The biggest fish was 63cms, that’s a solid 6.5lbs fish, and there were a lot in that high 40s/50s range.
“I’d just like to say thanks to everyone for coming and to everyone who helped out. Thanks to Cory for helping mark the beats and to score and to (fellow organiser) Chris Young as well for all his help.”

As well as thanking the competition organisers, SFFNZ would like to thank the landowners who allowed access across their land to the beats and to Fish and Game; without this valued and continued support these events could not happen. 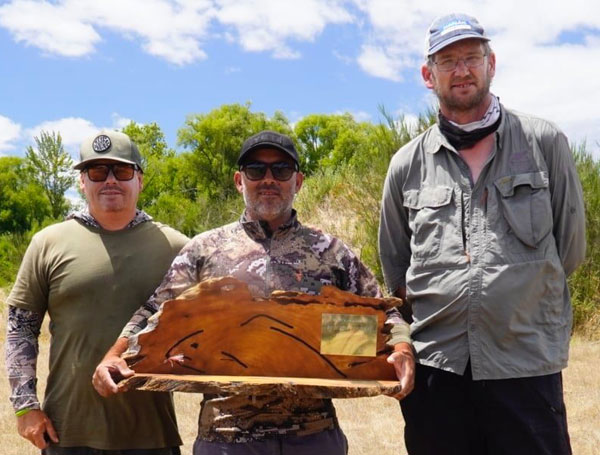