The 2009 CD SFFNZ champs were held on the 20th, 21st and 22nd of February on venues based out of National Park. Twenty four anglers entered the event.

The anglers were broken up into two groups with 12 anglers on each lake.

The first session on Lake Kuratau was won by Gary Lyttle with 8 fish from Dan Comer and John Bell who also got 8. On Ota Tony Houpt lead the way with 7 from Steve Brown with 7 also and Kyle Melnyk with 6.

Session 2 on Ota saw the lake getting dirty but Paul Baker managed to get a great tally of 10 to lead from john Bell with 9 and Strato Costilinis. Kuratau fished quite  a bit harder but Peter Scott recovered from his blank in the morning to win with 8 fish from Paul Dewar with 4 who just piped Tony with 5 but smaller.

Tony lead at the end of day one with 4 points from John with 5 and Dan with 6.

The weather was better for day two and the B group on Ota had some great fishing in the clearing water. Kiyoshi Nakagawa lead the way with 11 fish from Jon with 13 but smaller and Dan with 9. On Kuratau Peter also got 11 to win from Aaron West with 8.

Session 3 in the afternoon was quite fine, on Ota A group was won by Aaron with 6 from Graham Evans with 4 big ones and Tony with 5. Dan won on Kuratau landing 11 with John 7 and Tony 6.

These results gave John Bell the lead at the end of day 2 with 9 points from Dan 10 and Tony 12 and Kiyoshi 15.

It all came down to the last day on Lake Rotoaira.  The weather was carm and warm to start but the wind soon came up, the big decision was what end of the lake to go to. John Bell and Kiyoshi chose the top by the Potu canal which proved to be a good decision Yohsi winning his group with 7 fish from Paul with 7 also and Strato with 6. In group A Aaron won with 8 from Peter Scott with 4 and Graham Evens with 3.

It was a great competition considering the late changes, thanks must go to Aaron West and his crew for doing all making out of beats on the Whanganui that weren’t used. 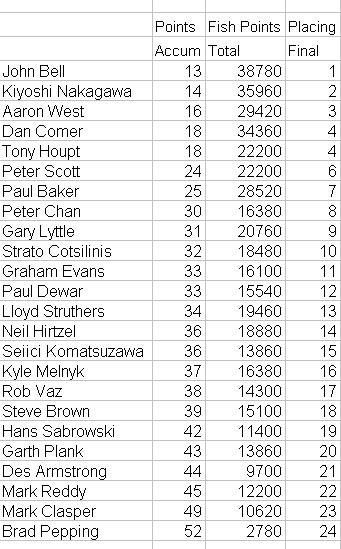