The previous minutes were distributed and unanimously accepted as read.

President Jill Mandeno reported on the activities of the Society for the past year.

SFFNZ sent a team to the World Championships, which were held in Swedish Lappland. The President congratulated the team on their 13th placing (out of 21 teams - one behind the hosts, Sweden and one in front of AUSTRALIA!!!), and in particular, Lloyd Struthers for coming 11th in the world and being one of only 2 anglers to catch fish on both competition lakes.

She reported on the World Congress which was held in Spain and Don Short agreed to post the report which had already been circulated to the Board, on the club web site. She announced that the next World Championship venues are as follows:

Scotland, New Zealand and Finland are all vying to host the 2005 championship. The Board later agreed that we should change our request to hold the event here to 2006. Applications need to be lodged 12 months before the 2003 World Congress in Slovenia.

She also noted that during the Congress there were a couple of reports about the value of fishing to the community. The Senegalese Ministry of Tourism and Fishery, which administers their large off shore game fishery, commercial sea fisheries and lake/river fisheries, has done some research which shows that the value of a fish caught recreationally (to the local economy) is 2000x that of a fish caught commercially for the local or export industry.

The Irish Federation also reported on a major Government sponsored study done in Ireland after the collapse of the Sea Trout fisheries due to infection from farmed salmon. This showed that the recreational fisheries were worth £P34 million per annum while the commercial fisheries were only worth £P30 million to the local economy. Anyone making submissions to government in NZ on the value to NZ of recreational angling should be aware of these figures.

The President also reported on a major push by many of the European countries to introduce drug testing to the sport of fishing and to emphasise to young people that fishermen don't need drugs!! There are particularly strong programs in this area in Germany and Bulgaria (both in connection with both the fly fishing and coarse fishing federations). Mr Don Short pointed out that it has been a NZ government requirement for some time that all NZ sporting teams be tested for and found clear of, drugs prior to competing overseas in the name of the country. Potential team members take note!!!!

The President also noted that it had come to her attention that training sessions put on for members of the teams last year had not been well attended. This is unfortunate as they take a considerable amount of effort to organise. She also noted that there seemed to be a reluctance on the part of some members to make any adjustments to their style of fishing even after attending training sessions. She noted that the types of fishing we which we generally encounter in Europe are quite different from those found in Australasia. It therefore behooves members to take advantage of the experience and advice offered which is specially aimed at teaching fishing techniques such as those required for catching large numbers of grayling. Mastering these methods is the only way to improve our team placings in World Championships.

The accounts for the Y/E 31 March 2001 which have been approved by the auditors, Gillingham Horne, were presented and accepted unanimously. They show a small surplus which can be used to support this year's team.

The National Championships were not concluded at the date of the AGM so the results are appended to these minutes following the conclusion of the competition on March 24th.

The World Championships for 2002 will be held from 3-10 July in France. The team will fly in probably the weekend before, for practice. The Team Captain will be Mr Strato Cotsilinis and Ms Jill Mandeno will be team manager. Mr Lloyd Struther and Mr Dereck Nees are automatically assured of places in the team and the three remaining places will be chosen at the competition in Hawkes Bay in April between the top 10 anglers in the National finals.

There will also be a Commonwealth Championship this year in Wales following the world Champs (see below).

Strato reported that the approximate cost for both the World and Commonwealth Championships will be $9000 with (at present no more than $1000 per person funding from the Society) and no other sponsorship in place. Potential team members were advised that in the absence of any team sponsors they would be free to take up individual sponsorship contracts providing they clear it with Strato first (in case we are able to arrange some sponsorship).

The Commonwealth Championships which were postponed last year due to the British foot and mouth outbreak will be held this year in Wales from 15-18 July, fishing on Lynn Brenig and the River Dee. Teams so far entered included those from England, Scotland, Wales, Canada, South Africa, the Isle of Man and probably Australia. Providing there is sufficient interest, the team to the World Championships will travel on to Wales for this competition.

The next Oceania Championship will be held the first week in December 2002 in Tasmania. Australia have reported to the President that Canada has accepted an invitation to send one team. Similar invitations have been issued to Singapore and South Africa. New Zealand and Australia will each field two teams.

The competition will be run wholly on lakes in the Highlands of Tasmania with the venues to be confirmed later but including London Lakes, and a selection from Arthur's Lake, Penstock Lagoon, Little Pine and possibly one other lake near Bronte Park. Accommodation has been booked at Bronte Park for the team as this will be the headquarters for the tournament. The cost will be approx $180 per person per week plus meals, transport and tournament fee - and of course airfares. The President reported that she had inspected all the proposed venues and the accommodation and was quite satisfied as to its suitability.

The Board regretfully had accepted the resignation of Mr Laurie Kidd during the year as sponsorship manager. Mr Kidd had felt that his business position conflicted with the requirements of his Board Position. We thank him for his efforts and have accepted his resignation with regret.

Members were asked to nominate a successor to Mr Kidd or for a volunteer to take his place. Mr Patrick Hegarty volunteered to take over this position and his offer was accepted to widespread acclaim from the members.

Mr Peter Casserley offered to approach the pub charity to see if they would be willing to provide some sponsorship funds again. There was a major discussion on how to improve the situation with few concrete suggestions. Dereck Nees very kindly offered to donate a guiding session with any large sponsor which could be found, which offer was gratefully accepted by the Board.

The President stated that the Board had discussed trying to establish a SFFNZ Sponsors Club limited to 25 members at any one time. However to succeed this will require some effort on the part of members to both sign up Sponsor Club members and to provide some sort of reward for them. Sponsor Members will be asked to commit to a donation of $100/month for five years. After some discussion it was agreed that we should provide the following as benefits to Sponsors Club members:

a)  Conduct at least one and possibly 2 training sessions in casting techniques and European Fly Fishing techniques each year. These would be open to both members and sponsors on payment of a fee to cover costs.

b) Invite Sponsor Members to participate in an annual Pairs tournament. It would be held between these members and finalists in the National Championships. The tournament would be over one morning session,  one or two days before the competition starts. The President will obtain a suitable trophy for this. Anglers will fish with one sponsor and one finalist in each pair, in a similar manner to that used in the pairs competition organised by Mr Mike Stent last year.

In addition, the Board has previously agreed that it will to produce badges, patches and plaques with the society logo etc for presentation to each Sponsor and/or Sponsor Club Member.

The President also pointed out that the way to add to club funds was to recruit new members. Each of the current members is challenged to sign up two new members this year and to raise club membership to over 300. Members are entitled to enter all competitions for payment of the competition fee only. They receive the newsletter and are entitled to participate in all training camps etc. and to attend the National Champs and the AGM.

The  meeting closed at 8.30pm and the next one will follow the next National Championship.

Postscript: Your President apologises as she quite forgot, both at the meeting and also at the medal presentation ceremony on the following day to ask for a vote of grateful thanks from the members present, to Strato Cotsilinis , Mike Stent and all the regional co-ordinators (whose names appear below) for the magnificent job they did in organising this years National Championship. I greatly appreciate all this effort and would like to record my personal thanks. I feel sure this also reflects the feelings of the membership.

At the request of Strato, all the competitors and members present started the Championship presentation ceremony by observing a minutes silence in sympathy with Ray Port. As a Society we extend our condolences to Ray on the sad and sudden loss of his son, which prevented him from attending the final ceremonies.

Results of the National Championships Rotorua, 2002

The anglers fished over five sessions. The first two were in boats on Lake Anawhenua. The next two were on different beats of the Rangitaiki River and the last was back on Lake Anawhenua in boats. Anglers fished two to a boat with a dummy angler making up the tenth pair. Each fish caught was measured and points calculated as 100+ (20 x length in cm (rounded up)). The angler with the largest number of points wins and is placed first; the next is 2nd and so on. The placing points for each session are added together and the angler with the lowest number of placing points wins. An angler who fails to catch any fish during a session (blanks) is given a place score equal to the number of anglers in the tournament.

You will note from studying the score card below that it is normally not possible to win with even one blank. It is also difficult to place with even one score in the bottom 50% of anglers. It is also not necessary to win every or even one session to score well. The scoring system rewards those who consistently score in the first 30-40% of the competitors. 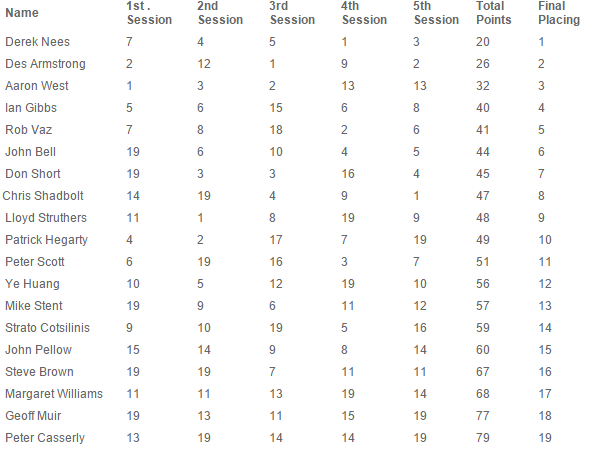 Congratulations are especially due to Derek Nees for becoming the first person to win the National Championship two years in a row.   Congratulations also to all the top 10 anglers. They will now compete in the fish off on 6/7 April in Hawkes Bay (as agreed at the last GM), for the remaining 3 places in the NZ Team for the World Championships. They will join Derek Nees and Lloyd Struthers who retained their places after the last World Championships.

The 10 top anglers will also form the two teams for the Oceania Championships in Tasmania in December 2002.