Lake Aniwhenua was formed by the damming of the Rangitaiki River in the late 70’s, so understandably its history is a brief one. Its reputation has mainly been for the number of trophy trout that have been taken, after awesome fights, from its shallow weed beds and the clear patches between. It’s a not so much mentioned, but very significant aspect of the lakes history is that it has been the venue for many Sports Fly Fishing regionals and nationals during that time and that the first pairs competition was held there as well. The lake performed so well over the weekend of the Rotorua regionals that this is history in the making and that as a venue for fly-fishing competitions it certainly deserves its place.

That’s not to say that it was easy or that cricket scores of fish were caught. Most anglers had a few anxious moments, as this early in the season the lake was a little inconsistent. This of course favoured the anglers that worked hard and stayed focused. Added to this was the usual range of weather that a regional attracts, in this case heroic sunshine followed by rain and an icy blast straight off the Urawera’s. The biggest issue that Mother Nature threw at us though was an almost total lack of wind. That mixed with a quite insignificant current along the Lake made predicting drifts, or indeed achieving them at all quite tricky in all but the 2ndsession when most boats finally needed to use their drogues.

The first session saw all 5 boats initially head to the upper section of the lake. This paid huge dividends for Dan Comer who measured 8 fish over Tim Rich and myself with 4 each and took first place. That he might know these fish by name and that he might also have known their parents was less significant than the absolute belief he had in the flies that he was offering them and that they would be eaten.

The second session saw a couple of boats (mine included) start at the weed beds off the sand bank in the narrows at the middle of the lake as it had performed well at the end of the first session. Unfortunately the trout there had wised up somewhat and that area was soon passed over again with all boats but mine heading up stream again. The lower end of the lake fished poorly for us although Sam Bourne and myself had some fun above the ski lane with heart stopping fights with the fish there. It wasn’t however where most of the fish were caught and the top end of the lake produced the numbers and the larger fish. Brendan won this session with 6 fish from John Bell, Chris Young and Dan all with 3 fish and placing in that order.

Sunday was a gorgeous morning well suited to a long breakfast but the fish were there and more were measured than in the 2 previous sessions. Dan won this session with 5 fish from Brendan and myself with 4 each and placing in that order.

The tallied results saw Dan take first place from Brendan in second by a few centimetres. I placed third and after removing dummy angler scores Chris Young and Tim Rich placed fourth equal which they no doubt debated gently on the car trip home…

Fortunately our dummy angler is no dummy. Thank you to Neal Hawes for organising the completion and taking part in such terrific spirit. As a previous winner of SFFNZ competitions at Lake Aniwhenua and participant in the nationals it is terrific to have his continual support and commitment to sport fly-fishing in New Zealand. His knowledge of both SFFNZ and the Rotorua area contributed hugely to a successful and thoroughly enjoyable weekend. 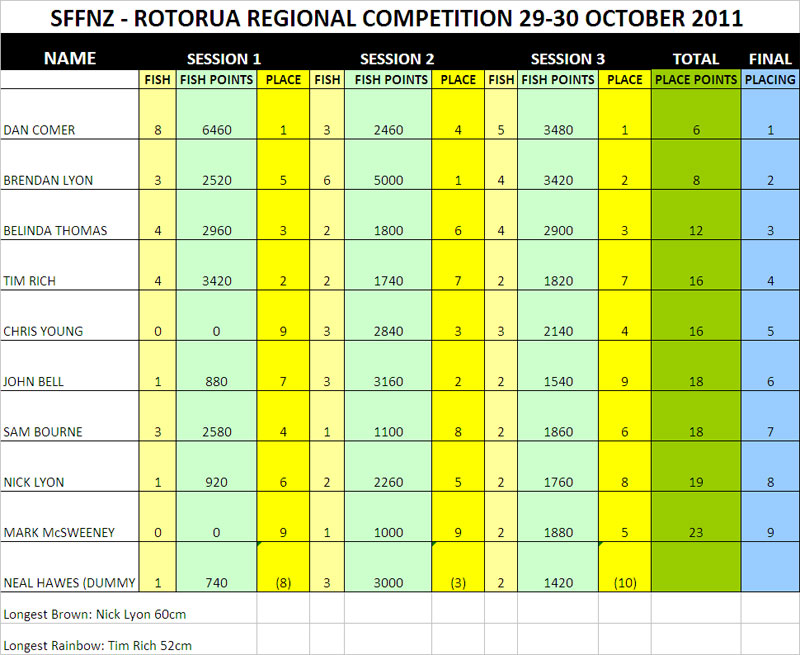