Ollie finished ahead of last year's Tauranga Regional winner Cory Scott and Kriss Stravs, who placed second and third respectively, in the event held on the Waimakariri Stream over the 18-19 September. Top female angler amongst the 16-strong field was Rachel McNae in 9th place, and biggest fish of the weekend was a 52cms rainbow caught by Billy Thrupp.

Ollie said he was delighted with the win after a slow start to his competition. “I didn't pick a counter up in my first session until about 50 minutes in so I was starting to get a bit concerned,” he said. “I ended up with three which got me a 6th place but then I had a much better second session. I fished that quite slowly and carefully from the bottom of the beat with a dry-dropper and then just re-rigged if I came to any deeper slots. I managed 12 fish off that beat for a second place in the session.”

The 20 year-old was in a 4-way tie for second place overnight, with Kriss Stravs leading, but his third session win on Sunday morning took him clear of the pack.
“On Sunday morning I was on Beat 6. I was following Billy Thrupp, who is a really good angler, so I was just looking for any possible spots he may not have fished. I was trying to be very methodical about it and I would say three of my six fish came in really non-obvious places, like just a little breaks in the bank or anything like that.”

Ollie said adaptability and care in fish-fighting were key in his victory. “I was definitely being careful about playing fish and trying to ensure I landed them, and consequently didn’t drop many fish all weekend. The other main thing I would say was being diligent about covering my water and changing up tactics wherever necessary.”
Ollie also thanked Tim Anderson, Rachel McNae and Suzie Foggo for braving the rain earlier in the week to mark out the beats.

The Waimakariri is a crystal clear spring-fed stream that holds a good population of small to medium sized rainbow trout. It rises in the hills north-east of the township of Putaruru and the competition was held on a stretch above and below SH5 which meanders across open farmland. The annual championship held there remains a popular date in the SFFNZ calendar.

Competition organizer Tim Anderson said it had been a closely fought contest but over the course of the weekend the better anglers found a way to rise to the top. He added that it was great to see so many new faces at the event and hoped they would continue to compete.
“Hopefully those who haven’t fished river competitions before enjoyed themselves,” he said. “If you’ve got a competitive streak in you it certainly takes your fishing to the next level, and gives you something to aim for all the time, a reason to hone your skills. Keep at it though, as it does take time to do develop those skills and get more and more consistent, it’s not an overnight process, and even when you do get to a good standard you’re always learning.”

On behalf of SFFNZ, Tim thanked the local landowners for their continued kind permission of allowing competitors access to the stream across their properties. In turn, Tim was also thanked for organizing the competition and, together with Rachel McNae and Suzie Foggo, for marking out the beats prior to the competition. 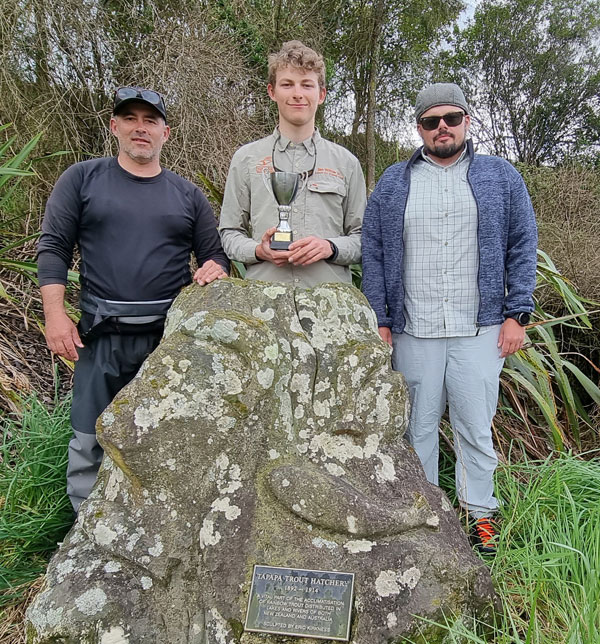 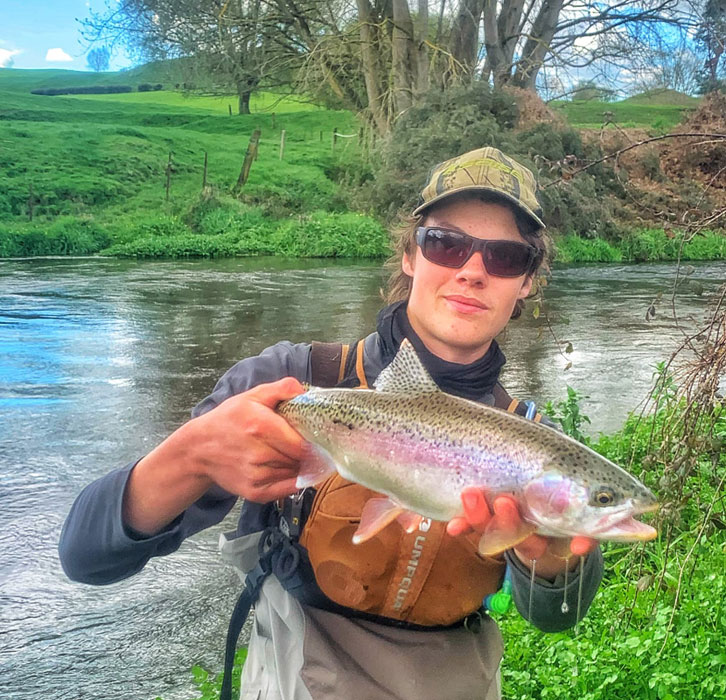 Ollie with a nice rainbow