It was that time of year again when the competition fly fishing season kicks off with The SFFNZ / CD Rods National Pairs Fly Fishing Competition which announces the start of another round of regional competitions.
Friday 27th October saw me hitching up my boat and together with my fishing partner Strato Cotsilinis heading for Lake Rotoaira Turangi. On arrival at The Tongariro Holiday Park about 2.00pm we were quick to book in, unload the gear into the room, set-up our rods and head down for a quick practice.

We motored up to the Northern, or Wairehu Canal end of the lake and set-up for the first drift. Conditions were perfect with a gentle Northerly giving us a steady drift. We made a number of successive drifts over the area to the East of the canal entrance and between Motuopuhi Island over the next two hours, landing five fish between us.
It was then back to the Tongariro Holiday Park for a spot of dinner prior to the briefing for the competitors. It was great to see a number of the familiar faces at the camp, this is such a popular competition that has developed great camaraderie and friendships over the years.
With the briefing and ballot to determine our partners for the three sessions over it was time for last minute preparations before of to bed to dream of many fish coming to the net.

Saturday dawned overcast but relatively fine, the breeze was about 5 to 7 Knots as we were sent away by a toot of a car horn and a wave of the hand at 8.45am. This gave us 15 minutes to reach our preferred fishing positions prior to commencing fishing at 9.00am.

Session One
Joining me in my boat for the first session was Tony Houpt from the Wellington Fly Fishing Club. Tony was the partner for Dave Alexander my partner from previous years. This was Tony’s first competition although he has been putting in the practice with Dave over recent months.
This became apparent when he had two very nice fish in the boat before I was to touch one! We were again fishing at the Northern end of the lake in the area where Strato and I had fished the day before. It was to prove a very successful area with Tony and I landing 13 fish over the three hour session, 6 to Tony and 7 to myself.
We both had started of with clear intermediate lines but had to move to faster sinking lines as the wind freshened in the last hour of the session.
Back at the boat ramp it was time to have a spot of lunch and find out how the others had fared in the morning session.

Session Two
Session two saw me partnered with Andrew Blake from Turangi. Andrew is a fishing guide at Turangi and was partnering Nick Dobyn in the competition. The success of the morning drew us back to the top of the lake, the breeze had freshened now and it was Di5 line time to make sure we were getting down to the fish. The afternoon session was harder than the morning session this was obvious by the fact that you could see boats moving about with more frequency in search of fish. We had to do the same trying a number of spots from the Canal to the power house, and then down the east side of Motuopuhi Island. We finished the session with seven fish 3 to Andrew and 4 to me.
So ended day one I was quite happy 11 fish is not a bad result in this competition. However the news was
not good for Strato my partner, the usually reliable Strato had just failed to fire and combined with some bad luck in landing fish had finished up the day on 4 fish 3 in the first session and 1 in the second.
Good news for Dave Alexander and Tony Houpt they had ended up the day 11 and 10 fish respectively putting them in first place end of day one. The best success of the second session went to Kiyoshi Nakagawa with 9 fish a great effort.

The evening was the usual good banter great fishing stories to go with the evening meal, a few beers or a glass of wine. The forecast did not look good for the Sunday with potential for 70 knot winds and rain. However the fishing gods smiled on us and the day dawned similar to Saturday.

Day Two Session Three
Session three decision time where to go this time to catch fish? My partner was Graham Evans and we agreed that we felt that the majority of the boats would head to the Northern end of the Lake again. So we decided the opposite direction and headed over towards the Poutu Canal. The breeze was about 10 knots gusting occasionally to 15 knots with a medium wave action I stuck with my Di5 line and we set-up a drift opposite the fence on the western side of the canal. We had about three drifts before I hit the first fish and then with in minutes number two. As we continued we noticed that we were hitting fish in particular point of the drift, an area with an unusual yellow tinge. It was Pine pollan and it was a defined strip about 30 to 50 metres wide stretching west wards out into the lake from the Pouto Inlet Canal. Basically the fish were sitting either side of this strip. We shortened our drift and followed this “Yellow Brick Road” with successive drifts westwards across the lake towards the boat ramp. It was hot fishing with me hooking thirteen fish and landing ten. When I got to nine I desperately wanted that tenth fish and that is when I dropped three in succession, to keen I guess. However the tenth one did come to the net with ten minutes to spare. Graham did not fare as well as he was stuck with out the right line for the conditions and finished up with one dropping a few through the session as well.

Judgement Time
Gathered on the shore the boats out of the water for the last time people stood around awaiting the final verdict. So here we go the results for The SFFNZ / CD Rods National Pairs Fly Fishing Competition:

Strato and I finished 7th but I was overjoyed to come out as top individual with 21 fish for the three sessions. So all in all Kapiti Club can be proud, we have again had strong representation at this event. This also means that we will again have two representatives at the Nationals in March next year David Alexander and me.
Summary
What a great event here are some interesting statistics
Anglers 32 (16 boats)
Total hours fished 9
Total fish 292
Average size 41.61cm
Largest Fish 63cm 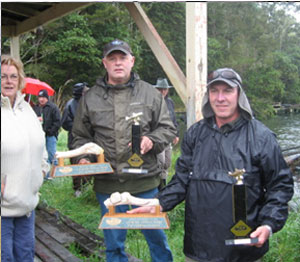 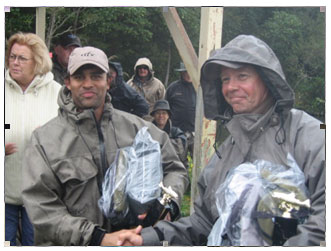 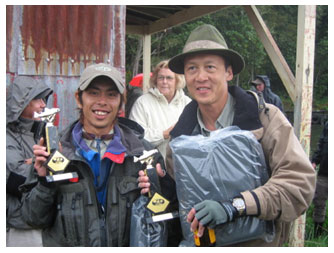