Billy Thrupp has won his first regional SFFNZ title with victory at the Rotorua Regional competition on Lake Aniwhenua.

Billy’s previous string of podium placings without a win had earned him the nickname of ‘The bridesmaid’ but he finally got over the line at the weekend, and broke a record in the process. The 1st, 2nd, 3rd spots were, in order: Billy Thrupp, Ben Henton and Johnny Bell.
“I won the National Pairs with Cory Scott in 2019 but this is my first individual title,” said Billy. “I’ve had quite a lot of seconds and thirds so it’s great to get the win.
“You just really have to work out the fish and the spots and then milk them when you get the chance, make the most of your opportunities. I had three fish in three casts right at the end of the first session, so I went back to that spot at the start of the second and got into a lot of fish. Me and Ben (Henton) pulled 16 fish out of that hole in real quick time, and that set up the session. I went back the next day and got another six out of there as well.”
Billy caught 18 fish in his second session. The tally was a SFFNZ record for a single session on Lake Aniwhenua, beating his friend Cory Scott’s mark of 17 fish set in 2013. Remarkably he says he also dropped quite a few fish during that session.
“I have spent a fair bit of time on that lake so I had a few spots in the back of my mind that I could try in different conditions,” said Billy. “It’s about mixing up your tactics to suit those conditions. I stripped the first session, plonked the second and then a mix of the two in the third session. I really enjoyed it all overall and fishing with everyone I fished with, it was a great competition.”
Billy and newcomer Ben Henton actually tied on place points but Billy took the win by virtue of superior fish points. Ben, who earlier in the year was victorious in his first-ever competition on Lake Maraetai, congratulated Billy on his victory.
“I was really happy to make the podium,” said Ben. “I fished with some great anglers over the weekend, and Billy was one of them, he fished really well and slayed it in that second session. You’re always learning off those sorts of guys and it was a great experience. Every person I fished with during the comp was good fun to be with and that’s what it’s all about at the end of the day, just enjoying it.”
Competition organiser Johnny Bell said the weekend had provided a variety of fishing opportunities and challenges but consistency, as always, was what proved decisive.
“The two sessions on a hot and sunny first day provided great fishing,” said Johnny. “As the day heated up and the damsel nymph activity increased many fish could be seen moving. Anglers had success targeting holes and channels in a relatively shallow lake but also could target finning browns and rainbows in the shallow margins and in amongst the weed patches.
“Fish numbers were high for those who took advantage of the activity, with Session 1 honours going to Hugo Pearce with 10 fish. In session 2 Billy Thrupp was dialled in, posting a pending record session score at this venue of 18 fish a fantastic effort.
“Consistency is the name of the game in competitions and going into the final session on Sunday, newbie Ben Henton and veteran John Bell were tied for the lead closely followed by Billy Thrupp. Conditions were quite different with a cold rain front moving in making fishing challenging.
“Billy Thrupp won the final session with 10 fish, followed by Ben Henton with 9; leaving the two anglers tied for first place and a countback of fish points was required to separate them. Billy Thrupp’s 18 fish in his Session 2 haul made him the deserved winner, followed by Ben Henton with another great performance, and John Bell in third.” 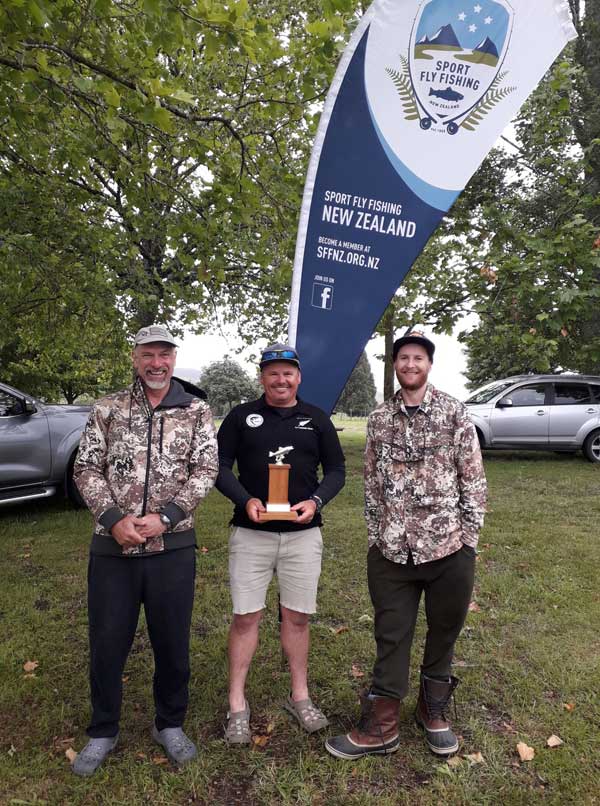