It was NZ's turn to host this year's Oceania Fly Fishing Championship - the bi-annual series competition for the Oceania Trophy was, as usual, fished between the Composite Developments NZ Silver and Black teams and the Australian Gold & Green teams. This year there was also an invitational team made up of anglers from Overseas and NZ.

The five man teams are divided into five groups for the competition with five anglers in each group.
The five sessions of the competition were fished on the Whanganui and Manganui O Te Ao rivers and Lakes Otamangakau and Kuratau over three days.

The first day was reasonably close with Australia doing well on the Lakes and NZ winning the river sessions. For the NZ Silver (A) team Kiyoshi Kawakawa led the way with 2 wins on the Wanganui River, and Peter Scott winning on the Manganui.
At the end of the day NZ Silver were just in the lead from Aust Gold by one point with NZ Black in second place.

Friday dawned wet with a lot rain overnight but the rivers were up a little but still in great condition. The two NZ teams did fantastically with the Silver team winning seven of the eight sessions held on the day. Kiyoshi won two lake sessions as did Dan Comer; Paul Dewar and Garth Plank won on the Manganui and Peter won both his session on the Wanganui.
The results saw NZ Silver well in front of Aust Gold and NZ Black third. Kiyoshi and Peter were leading the individual standings with Dan third.

Saturday started with all the anglers raring to go in the last two sessions. The NZ teams had a magnificent day with Silver team mambers Peter and Dan winning two sessions and Kiyoshi and Tony Houpt one, Paul got a win and a second. In the Black team Garth plank, Paul Baker and Mark Clasper all had wins.

When the final results were tallied the Composite Development NZ Silver team had won comfortably with 45 points from Aust Gold with 68 and NZ Black just behind on 73.

In the individual standings both Kiysohi Nakagawa and Peter Scott had won all five of the sessions,an incredible effort never before done. Yoshi won on count back from Peter with Dan Comer 3rd a point behind. NZ filled the top 6 places with Garth Plank 4th, Paul Baker 5th and Paul Dewar 6th equal. 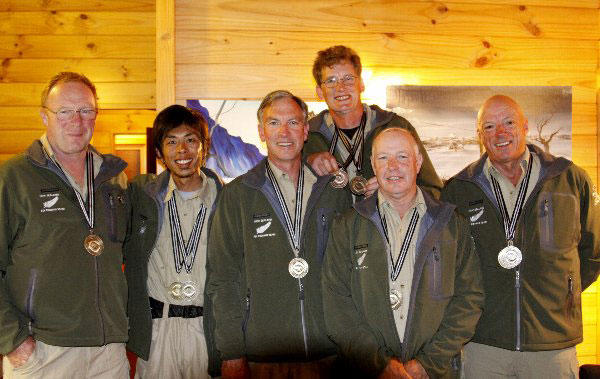