The first session was held with group A on Lake Atiamuri and B on Lake Whakamaru in calm flat hot conditions. Atiamuri was tough with 5 anglers getting no fish,  Aaron West was the best with 3 fish and 4 others got 2.

On Lake Whakamaru Des Armstong was the best with 5 fish and Dan Comer got 4 and Gary Lyttle 3.

The groups switched lakes for the second session and Atiamuri was still fishing tough with 6 blanks for group B, Gary Lyttle had it worked out and got 5 fish with Kyle Melnyk the next best with 3.

In group A on Whakamaru Tony Houpt was leading the charge with 5 fish and Kiyoshi Nakagawa and John Bell with 4, with only 2 blanks

There was a big drive with the teams switching venues for the afternoon session, Craig Farrar won group A on the Whanganui with an incredible 20 fish, the next best was David McLellan with 9 and Aron 3rd with 8. On the Waihou Des won landing 13 fish, Garth Plank got 12 and Nick 10.

The placing’s were quite tight going into the last day on the Whanganui river with several people being in a position to win the championship.
There were a lot of fish caught with great conditions on the river, Kiyoshi won group A on the upper river with 8 good fish beating Craig who got 10 but smaller ones. Garth Plank won group B with 20 fish from Rob Vaz with 17 and Steve Brown 11.

Aaron West was the championship winner with 15 placing points, Craig Farrar came through to get second with 18 and Des Armstrong third with 20.

It was a great competition with a lot of fish caught on most of the venues and the Whanganui proving a great venue with several fish over 550 mm and one of 610 mm. 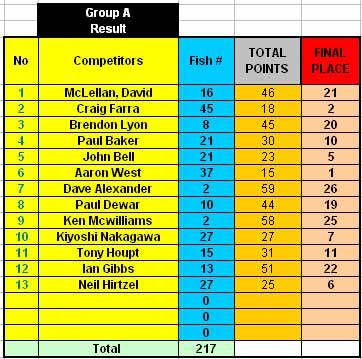 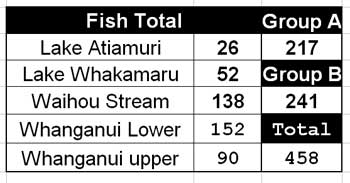